There Will Always Be A Place For Rakes

“The role of the hay rake will never go away,” insists Mike Kindley. “We’ve seen rakes evolve into different styles with new advanced features, but there’s always going to be a place for rakes in quality forage production.”

As a technical service support specialist for Vermeer, Kindley has seen plenty of examples. While some producers continue to mow hay without a conditioner and use a rake to form a windrow, he says others use a rake for other cost- or quality-saving purposes.

“It all depends on the climate, drying conditions, baler capacity, etc.,” he says. “However, the role of a rake these days primarily revolves around moisture control and/or baler capacity, which involves pulling two or more windrows together so a high-capacity baler can make fewer trips over the field. With proper adjustment of the raking width and windrow width, you can produce a windrow that perfectly fits the bale chamber,” he adds.

While Vermeer and its competitors offer a number of different rake styles and models, Kindley notes that, in general, basket rakes, like the Vermeer R Series Rakes, and rotary rakes are best for high-volume crops like irrigated alfalfa and haylage. That is especially true of dairy quality alfalfa, since the rake baskets are powered, either by the PTO or hydraulic motors, and do not require contact with the ground or stubble. Hence, there’s less chance of getting rocks, dirt or ash in the crop and a reduced chance of broken teeth.

Wheel rakes, on the other hand, are ideal for grass hay, thinner crops and corn stover. However, when properly adjusted, they can also be very gentle on legumes, since the wheels and teeth move slower than they do with other rake designs. Vermeer models range from the simple, value-priced Rebel RB20 Rake, on which the wheels float in pairs, to the VR820, VR1022 and VR1224 Carted Wheel Rakes, which allows one-pin adjustment of wheel down-pressure.

Kindley is perhaps most impressed, though, with the VR1428/VR2040 High-Capacity Wheel Rakes, which he sees as being a good compromise between the two types.

“For one thing, these models provide a wide range of raking widths for light crops and heavy crops alike,” he says. “However, the best feature is the hydraulic suspension and the independent flotation on each wheel. Thanks to the precise control, the operator can actually adjust the suspension pressure to the point where the wheels will leave any dirt and ash behind. The rake can even be set to leave a desired portion of residue in a corn field, while the remainder is raked into a windrow,” he adds. “Plus, with a range of motion of over eight feet and a suspension cylinder on each wheel, backed by a nitrogen-charged accumulator, the VR1428 and VR2040 provide far more flexibility than a basket rake in uneven terrain.”

No matter the rake type, though, Kindley insists the moisture level at raking is the most important factor. That is why he also recommends the use of the center splitter attachment, which is optional on all models. By lifting and turning the center of the swath, the entire crop is mixed and the full windrow is allowed to dry evenly. 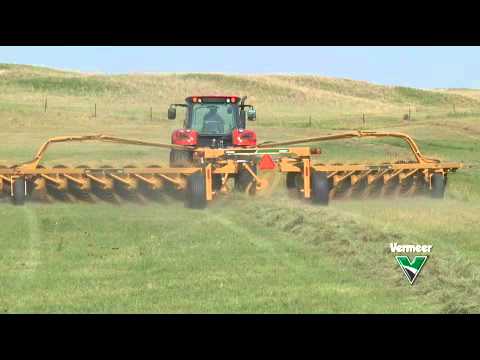