Why Phil Johnson Switched to the Vermeer TM1400 Trailed Mower

Phil Johnson can remember driving through Orange County, New York as a child and seeing dairy farms left and right. He recalls that back in the 1960s, there were roughly 600 dairy farms in the county. Go back a few more decades and there were thousands. A veritable dairy mecca located just 60 miles north of the Big Apple.

Today, 39 dairy farms operate in Orange County, of which Johnson estimates that 90 percent of them are family-run operations that have been passed down from generation to generation.

This includes Fort Hill Farm, where Johnson is fourth-generation owner. His operation is home to a 560-head herd, including 270 Holstein milking cows currently in production and 250-300 young stock not yet ready for the big leagues.

At an average production rate of 20,000 pounds per cow, Fort Hill Farm produces about 5 million pounds of milk each year. Every other day, the dairy ships 30,000 pounds of milk to a creamery in Jamaica, Queens. The farm fresh milk eventually finds its way into New York City school cafeterias, where urban students drink it by the carton.

“We work hard to produce a good, fresh product, and the end result is New York City school children are drinking our milk. We’re pretty proud of that,” said Johnson.

In addition to the dairy operation, Fort Hill Farm includes 2,300 acres of corn and hay crops. Half the corn is typically harvested for grain and the other half as silage for the cattle. Johnson puts up round and square bales of dry hay, and a significant amount of haylage to boot.

Inspired by studies conducted by Tom Kilcer of Cornell University, Johnson has in recent years been focusing on wide-swath haying in an effort to shorten dry-down time.

According to Johnson, “With wide-swathing, we don’t condition the crop when we’re making haylage. Kilcer found that if you leave it in a wide swath, hay dries down to 60 percent moisture just as fast as if you condition it or don’t condition it. You can make hay in a day that way, and that’s why we looked at the Vermeer TM1400 trailed mower.”

“The independently floating cutter bars means this mower flexes. It’s not like we have a straight 18-foot cutter bar and one end’s off the ground while the other is digging into the ground,” said Johnson. “Our fields are small and rolling, and there’s a lot of variation to them, so the suspension system in this machine has been a big benefit for us.”

What Johnson also likes is how the TM1400 folds down hydraulically to 8.5 feet for ease of transport.

“Believe it or not, but we have a tremendous amount of traffic around here,” Johnson said. “So we’re dealing with a lot of stop signs, stoplights, intersections and traffic. With our older mowers, all this traveling was an issue. They were old 12-foot machines, but the TM1400 folds down to be only 8.5 feet wide. Unless you go with a smaller machine, there’s no other mower made that cuts 18 feet wide and folds up to that size to go down the road.”

And that’s why Phil Johnson switched to the Vermeer TM1400 trailed mower. 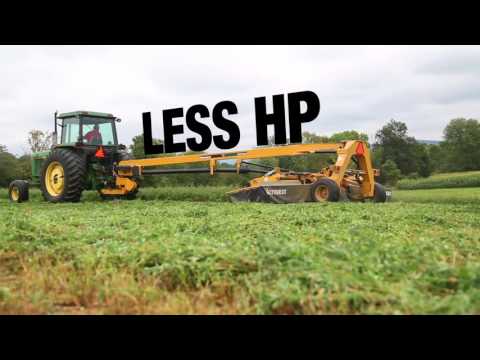