Why Rick Moore Switched to the Vermeer MC3700 Mower Conditioner

On a farm in eastern Ohio, three-generations of the Moore family work together to manage their land. Rick Moore, landowner, works tirelessly with his father and son to manage a farmstead that began several lifetimes before him.

According to Moore, the family was granted the original land grant deed during James Madison’s presidency.

“The sheepskin deed originally started as 156 acres and was known as Cottage Hill Farm,” Moore explained.

Cottage Hill Farm grew to 700 deeded acres as it was passed down from one generation to the next. The Moore family rents an additional 2,300 acres making their current farmstead operation a sizeable 3,000 acres in total. While a majority of that land is used as pasture for their 750 to 800 ewes and 35 cows, 700 acres are dedicated solely to hay production.

“We focus on alfalfa and good grass hay,” said Moore, whose family takes pride in producing good-quality hay for their livestock.

“Usually we like to make the first cutting at about the middle of May, but last year it was around June. Mother Nature tells us when to start making hay,” Moore said. “We like to get four cuttings on the alfalfa depending on the year. With the grass hay, two is usually all we will get.”

With a large amount to cut each year, Moore found that his current mower was not able to keep up with their needs.

“With (the old) model I had trouble mowing because it would streak in heavy hay,” Moore said. According to Moore, his old mower also had the tendency to break several belts in a day.

“It finally got to a place where I would carry four spare belts with me just to mow,” Moore explained. “I told my dealer that if I could find another 12-foot mower then I was trading (the old mower) off. He said, ‘Vermeer is where you need to go.’ So, I traded it off and I bought a Vermeer.”

Moore upgraded to the Vermeer MC3700 mower conditioner and never looked back.

“From the first day out it mowed well; I loved it,” Moore recalled. “And with that hitch — they’re just showing off. That’s just the berries — I love that hitch.”

With the MC3700, Moore said he’s not only saving money on maintenance costs like new belts, but he’s saving time as well.

“I was impressed with the maintenance” Moore said. “To change knives — that’s slick. To grease and maintain — it’s simple. You know I don’t want to have to take off six or eight shields just to grease the machine.”

According to Moore an added bonus of the MC3700 was the capability to efficiently mow in light and heavy hay.

“(Our farm area) turned dry in July and August of last year, so some of our second crop was a little lighter,” Moore said. “The MC3700 mowed equally as well in the light hay as it did in the heavy. And like I say, you can mow as fast as you’ve got nerve to stay in the seat.”

With his troubles behind him, Moore said it’s a joy to mow his acres now.

And that’s why Rick Moore switched to the Vermeer MC3700 mower conditioner. 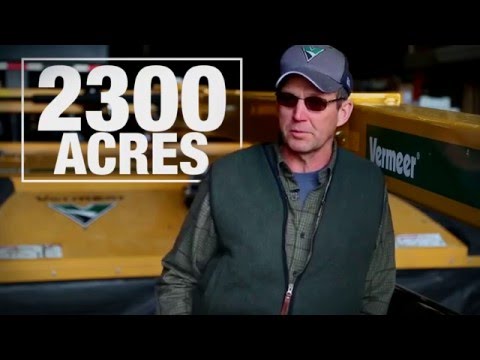