Why Scott Pridmore Switched to the Vermeer BPX9000 Bale Processor

Searching for Feed in Saskatchewan

When it comes to making hay, Consul, Saskatchewan, is a one-and-done kind of town. That’s because of its semi-arid climate (also referred to as a steppe climate) — defined as a region that receives precipitation below potential evapotranspiration.

Rain clouds don’t come through southwest Saskatchewan very often. Consul receives only 12.5 inches (316 millimeters) of precipitation annually, on average. Which is why producers in the area like Scott Pridmore of Pridmore Farms have grown accustomed to harvesting only one hay crop per year.

“One cut of hay is all we get here. Some guys may get a little bit of a second cut, but for the most part it’s one cut of hay. And it’s never a heavy crop. We always struggle to get enough hay,” Pridmore said.

With 500 to 600 head of cattle to feed, the fifth-generation rancher is constantly on the hunt for feed. Alfalfa. Wheat. Oats. Round bales. Square bales. Pridmore will take anything he can get, and he’s willing to look near and far to get it.

“We buy a lot of our hay locally, but this was a very dry year, so we had to go farther to find it. We went to the east side of Alberta. We went to western Saskatchewan. We even went down to South Dakota to get feed,” Pridmore said.

Bruce Johnson, a lifelong friend of Pridmore’s and the owner and sales manager of Ag Plus Mechanical, said feed efficiency is top of mind for ranchers in the area.

“Feed efficiency is huge in our area right now. We’re dealing with some unprecedented forage pricing, so guys are looking to maximize feed efficiency the best they can,” Johnson said.

One way to do that, Johnson said, is to use a high-efficiency bale processor, like the Vermeer BPX9000 bale processor he sold to Pridmore back in 2011.

“The BPX9000 gives you the ability to process a wide variety of materials, and you can switch from processing round bales to square bales with the flick of a switch, which is huge because it gives you more flexibility in the types of bales you can buy,” said Johnson.

Johnson estimates that his dealership has sold more than 50 BPX9000 bale processors in recent years, largely because of customers like Pridmore who are willing to share their experiences with potential customers. Once guys demo the BPX9000, Johnson said it almost never comes home with him. This includes Pridmore who was a huge proponent of the bale processor from the very first bale he processed.

“I liked the BPX9000 from the first day I ran it, and I still talk to guys about it all the time. Previous grinders felt very light. When you hook on to this thing, it’s heavy and you know it’s there. Just looking at it, you can tell it’s heavy-duty and well built. It’s full of iron and that’s what I like to see,” said Pridmore, who’s processed over 10,000 bales with it.

“The chain drive is what I like about it best,” he continued. “It keeps the bale rolling and feeding evenly. That was the biggest thing we didn’t like about the other ones. They’d jam hay up and you’d get a bale stuck in there. I was sick of plugging up the screws. With the BPX9000 there’s no way of jamming them.”

Aside from occasionally greasing the machine and clearing out twine every few days, Pridmore said his BPX9000 requires very little maintenance and has been a trouble-free machine for his operation. That’s greatly appreciated when it’s 10-below wind chill and you have 600 hungry momma cows to feed. Speaking of which, Pridmore said they’re eating better than ever.

“What we like about this machine is our older hay that’s got mold in it, we chop it through (the BPX9000) and it busts it up and gets rid of the mold and dust. I like how it grinds it up nicely and the cows do a good job of eating it. I feel like they clean up better now than they did with other grinders,” Pridmore said.

Before he even processes a bale, Pridmore said picking up and loading bales is much easier because of the vertical bale lift system.

“With the other grinders, I’d have trouble picking bales up and putting them in. I’d have trouble getting lined up right to get them. We have no problem getting ahold of the bale with the BPX9000,” said Pridmore. “Makes it easy to load bales, feed the cows and go home where it’s warm.”

And that’s why Scott Pridmore switched to the Vermeer BPX9000 bale processor. 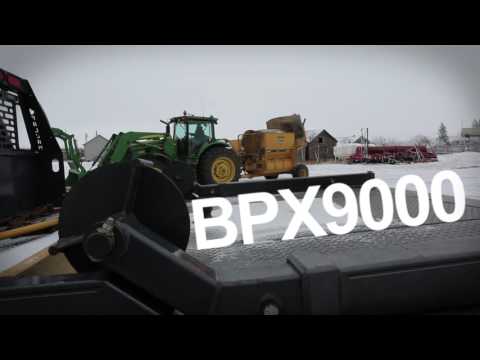