Why Steve Riley Switched to the Vermeer 504 Pro Baler

Steve Riley isn’t one to pony up cash for a new implement without first taking it for a spin around the block. So when he found himself in the market for a new round baler a few years back, he called on a few dealers to schedule some demos. This, he found, was no easy task.

Living in Deputy, Indiana, has its advantages. It’s located some 45 miles north of Louisville, Kentucky, and many in the area call it God’s Country for its picturesque rural views. What they don’t call it is a hotspot for farm equipment dealerships. In order for Riley to schedule baler demos, he was forced to call on dealers as far away as Wisconsin and Pennsylvania.

The first baler Riley demoed didn’t fare so great, as it topped out at about two miles per hour before plugging up with heavy, wet material. That’s because it was built for baling dry hay, which Riley will tell you is pretty hard to come by in this part of the country.

“It’s really hard to make dry hay here. It can happen, but the windows of opportunity are so short anymore that we just can’t seem to get anything done,” said Riley, who raises cattle and farms about 400 acres of row crops, tobacco and hay. “So wet hay is something we’ve been playing with the last 20 years. Now we’re pretty much 100 percent wet hay.”

That same afternoon, Kevin Abbott of Abbott Farm Products in Memphis, Indiana, showed up with a Vermeer 504 PRO silage baler.

“At the time, Steve was using a competitive baler and he was trying to get the slice. He wanted to slice the hay up, that was his main thing. The competitive baler would not do that. It wasn’t giving him what he wanted,” said Abbott. “So he wanted a baler that could give him the right length of cut. That way he doesn’t have a lot of waste that he has to haul out in the springtime and spread back out on the field.”

Abbott recalls seeing the large windrows of heavy, wet, green hay that Riley had raked in the field. Riley started baling with the 504 PRO and Abbott watched as Riley turned back again and again expecting it to plug. It never did.

“He just kept bumping the speed up on the tractor there, and he was getting up to 8.3 miles per hour without plugging. He said he tried to go faster but just didn’t have enough horsepower in his tractor. He said ‘I’m running out of ponies,’ and just laughed. It was like a kid with a new toy, the enthusiasm he had,” said Abbott.

Baling at higher speeds makes for good stories, especially at the coffee shop, but it’s the added productivity that comes with it that really excites Riley.

“With the 504 PRO I feel like I’m putting about 20 percent more hay in a bale, which has made heavier bales but we’re handling less. We’re wrapping less. There’s less cost in wrapping, which is nice when you have to rent a wrapper,” said Riley. “I’d say the biggest impact is it has increased the number of cattle we can run. If I can run another 15 to 25 cows and work no harder at getting hay processed, the 504 PRO lets me do that.”

And that’s why Steve Riley switched to the Vermeer 504 PRO silage baler. 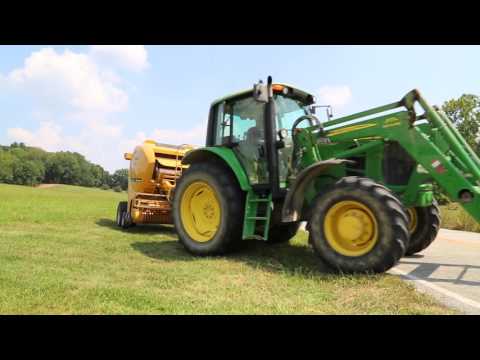